I can’t believe it is almost June and at how many pedal tours we have already done. No one appreciates this warm weather more then us your pedal tour drivers. All spring we have froze our butts off waiting on the bike while groups have been inside the bars and now it is warmer out we have more foot traffic to talk to talk about tours to. It is going to be a busy summer, weekends book up quickly, about a month and a half in advance so if you were planning on a birthday, bachelorette, retirement party, going away party you definitely want to book it sooner rather than later to ensure you get the date and time that you want.  In this post I wanted to share the good things people have done and also the bad things we have seen so that you can learns from others to ensure that your group has the best time possible.

Good: The decorating this spring has been amazing, people piggy back off prior groups signs and decorating to make the bike look spectacular. The signs on the back of the bike just keep getting cooler and cooler. We have had some great theme party’s ranging from Hawaiian/Margaritaville to everyone wearing a white t shirt and having sharpies to write on each other with to 90’s party’s. Shout out to the 90’s party for having some good, clean rowdy fun and making a great play list. 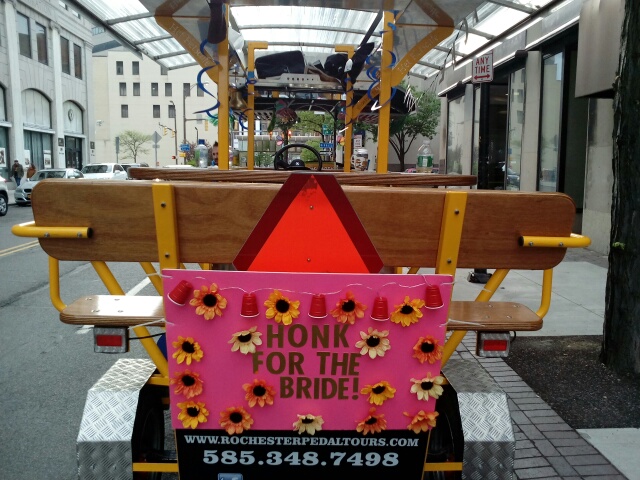 Bring food, snacks, appetizers and candy- On each route their is one stop that does not have a kitchen where you can bring in your own food and snacks. Groups are taking advantage of it by bringing all sorts of trays, food, (even 3 course meals) ordering pizza and wings to arrive their and all types of different foods. If I can just add one pro tip which is that vegetable trays never get eaten,  well they do get eaten by me because groups always leave them for the driver. Munchies are really easy to eat on the bike and a nice touch for birthdays, bachelorettes by bringing whatever their favorite candy is for everyone.

Water- We always tell the organizer to bring water and 95% of the groups have brought some water for people to have. Everyone else is thinking drink, drink, drink when they pack so the organizer should make sure to remind people/provide some especially as it gets hotter out.

Have Fun- when tours end we always pass out book now cards to anyone in the group who wants one in case they want to book a tour and everyone is asking us for one and telling us what they want to go on a pedal tour for.  Between the number of reviews that people write us and that we just sense when groups are having fun from all the laughter and smiling we know that groups are leaving happy and will want to do it again. As a business owner that is the best feeling in the world and I love when we have someone doing a tour on a Sunday that had done it the night before or when we tell someone on a tour about the Taco Tuesday Mixer and then they buy a ticket for a tour 3 days later.

Loitering- when your tour ends we have to get ready for the next tour and have to get the bike ready for them. What happens is groups debate where they want to go and it turns into a 20 minute debate. During our pre tour phone calls we let groups know to start working on plans for after so that they do not waste time trying to figure out what to do. You are in the heart of the East End with a 10+ place to pick between there is something for everyone the only wrong choice is wasting time figuring out where to go.  Where we load and unload is patios for 2 restaurants and we cannot have you interrupting their meal or using their bathroom without buying anything. Before you go into your last stop we tell everyone to use the bathroom before you leave for a reason

Bringing stuff we tell them not to bring- On our website and in the pre tour phone call we tell groups what to bring and what NOT to bring and we have had groups bring items that are prohibited.  We count on the organizer passing this information on to the group because you cannot bring prohibited items on the bike ex.) glass, liquor which includes jello shots and mix drinks in water bottles and boxed wines (3 and 5 liter sizes) and growlers which they plan on pouring into solo cups which we cannot have due to the huge mess they make with all the bumps. You may also only bring 2 alcoholic beverages per person (12 oz cans of beer) We cannot have these on the bikes and people must return them to their car and what happens is that people get mad because that is what they brought to drink. We abide by the laws and let groups know ahead of time, we do not know if the organizer tells the group or not but it is important that they do so we can avoid having this happen. We count on the organizer passing all of this important information on to the group and when they forget to tell the group the most important thing which is the alcohol policy it is not good news for them communicating the rest of the important information we gave them.

Let someone cancelling in your group affect your drivers tip- Nothing hurts me more than when a driver tells me that they put their heart into a tour and got a lousy tip. Our drivers are AMAZING and you will see it on your tour, they don’t go begging or guilt tripping they just have the mentality that if they do a great job they will be rewarded and for the most part they are. But when they don’t it always comes back to one or two people in a group bailing and the organizer using the tip money they collected to cover those people. Penalizing the driver to bail out the people who cancelled is not right and I have to stick up for my employees because they are amazing. Complements are great but don’t verbally tip them that doesn’t pay their bills.

See rain in the forecast and panic – the number of deaths, broken bones and emergencies sky rocket when rain is in the forecast from groups trying to switch dates. When we tell them they have nothing to worry because of the large awning and dropping them off in front of the bar all of a sudden people are getting healed, brought back to life and the tour goes on. You have nothing to worry about and in one sense it works out funner because the people in cars passing by show you extra love.

Thank you for taking the time to read this. Our goals are to make this as stress free on the organizer as possible and for your group to have fun and be safe.

2 Responses to “What A Great Start To The Year”