As you can imagine with a job like mine I see all types of stuff, I always tell my groups at the start that the people I am talking to now are not the people who finish the tour. In this slot I will tell you about all the fun crazy stuff I have seen. People always seem to think that younger groups are the worst behaved but I can tell you that is far from the truth, younger groups tend to be very well behaved, older groups tend to be the rowdiest.  What is a normal tour to me is a wild crazy night for you.

The high five game, this is an every person playing for themselves game to see who can get the most high fives. The point system is 2 points for anyone on a moving object (car, bike, skateboard) 1 point for high fiving someone on the street and half a point for an air high five (they must air high five you back, if they waive it does not count. Also they are air high fiving just one person not everyone so you must call your air high five) This is a gentleman’s game meaning you keep track of your own score, 2 records the first is 53 from Morgan’s boyfriend my first weekend, the second was aided by us walking by a 100 strong group walking by us as we pulled up in front of a bar. Both stand.
I love when cars bonk and cheer their approval, I love the effort groups put in to get the cars to honk when they go by. Bringing energy works best, I have a feeling cheersing people your beer will equal a lot of honks this summer. Don’t think for a second that people honk at us in a negative way and I can proudly say that we have never had any angry motorists. Cars are always checking out the bike and waving/high fiving when they drive past us. 2 great ways to get beeps are to put a sign on the back of the bike “beep for the bride” “beep for the birthday girl, boy” “you beep we drink” and the second is the good old fashioned hard work of getting a car’s attention and imploring them to beep.

The Bell: You are probably like why is he hyping up a bell, but when you ride a tour you will see why people fight over the bell seat. The bell on the bike sounds amazing and you ring the bell when you see someone looking at the bike. Whether they are taking a photo or video, pointing as they walk by with a friend in other words to say we notice you noticing us.  This bell draws some serious attention and the more attention the bike gets the more fun you will have.

Dancing: The bike has a Bluetooth system to our speaker so you can play whatever you want. This results in some epic dance parties whether it be when we park outside a bar and everyone stays on the bike to finish jamming to a classic or the riders at the back of the bike dancing.  Hip Hop BBQ Pandora tends to be the most played station, the great part of my job is the awesome stations and music I get to listen to. It really broadens my horizons.

Story Time: My all time favorite story from Rochester is this summer we were turning left on East to Alexander in front of City Grill and in the car next to us I realized it was Eric Wood and a bunch of Bills lineman.  I start shouting at Wood and everyone on the bike was Bills fans so they reached out for the high fives and the lineman in the back seat went to reach out and two of them got stuck in the window reaching for the high fives. The packed patio at City Grill had to be like what is this massive commotion and cheering about. In Buffalo we have taken out a tonnn of Bills, my favorite Bills story is I am in the middle of Encore and this guy grabs me and is like you are with that bar on a bike right? It is no other than Fred Jackson, I tell him how the tours work and he tells me that his wife wants to do it for her birthday and brings me over to his VIP table at the bar and gives me some champagne as I tell her and the other players girlfriends/wives about the tours and then got to spend the night partying with them. A highlight of any Bills fan’s life, he actually booked a tour to go out with them that I got to drive before I moved here. Awesome stuff! Another great story is my first week here we were testing out our South Wedge route to see if The Distillery could be a stop but to get there we had to go up South Ave and that is a massive hill. Going up on the bike is near impossible no matter how strong of peddlers you are but going down the hill we hit 35 mph! We had a skiing ap measuring our speed, the regular pedaling record non hill aided is 14 mph. 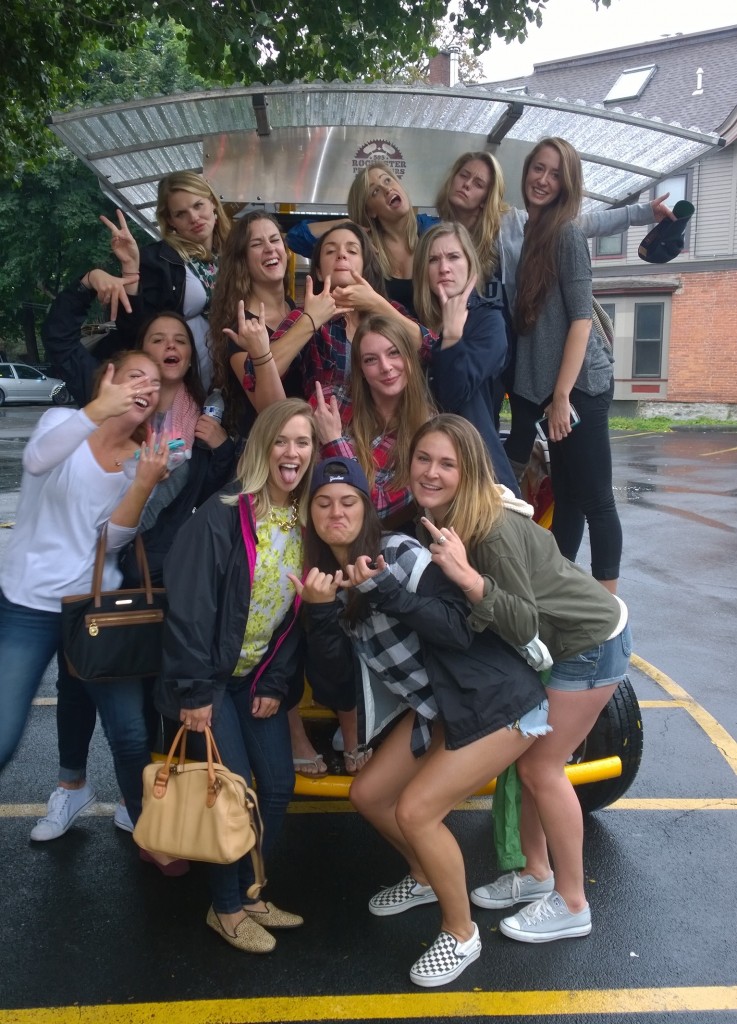